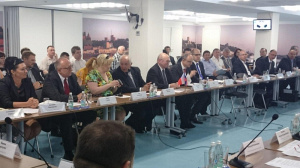 May 27, 2015 in the Chamber of Commerce of Nizhny Novgorod took place a round table and business negotiations between the delegation of representatives of the Czech business and Nizhny Novgorod companies. The Czech delegation was headed by the Czech Ambassador in the Russian Federation Mr. Vladimir Remek. Our colleagues from the office of Nizhny Novgorod took part in a round table on the issue of logistics and freight from the Czech Republic to the Nizhny Novgorod region. Czech companies for many years have been actively developed cooperation and production in the Nizhny Novgorod region. Traditionally the main flow of cargo from Czech Republic to Russia consisted of products of mechanical engineering (mining, energy, and processing equipment). According to the head of Albacor Shipping office in Nizhny Novgorod Lada Sedova in the so-called "contacts exchange" there were positive meetings with representatives of the two major Czech engineering companies as well as companies engaged in the supply of construction and technological equipment. There was also a representative of Czech logistic company, who took a keen interest in cooperation on cargo transportation from Czech Republic.