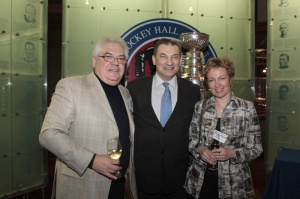 The second annual Charity Auction was held on November 30, 2010 at the «Fairmont The Queen Elizabeth Hotel» in Montreal, Canada. This year’s auction was billed as the «Tretiak & Kovalev Event», due to the support of the charitable foundations of Vladislav Tretiak and Alex Kovalev.

The year’s auction was billed as the «Tretiak & Kovalev Event» which was attended by over 400 guests from the Canadian-Russian Business Community and numerous fans and former «Canadian Hockey Greats».

Yvon Lambert, a former hockey star with the Montreal Canadiens was the auctioneer for this evening.

Mr. Tretiak came to Mr. Spillner to personally hand over his ring and thank him for his participation in Charity Auction.